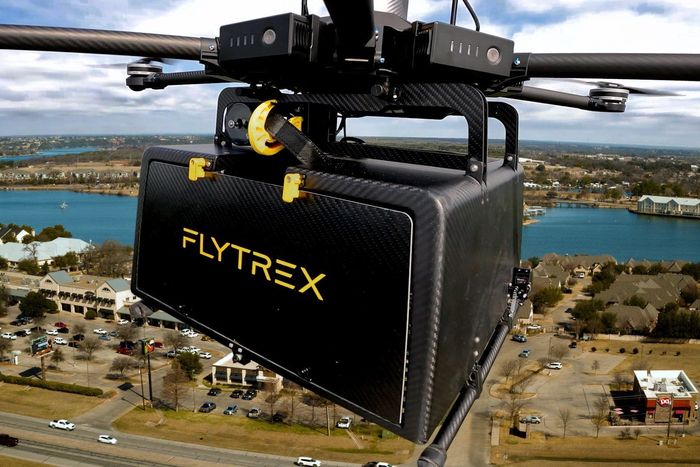 “After nearly a decade of largely unfulfilled hype about flying robots dropping orders at your doorstep,” writes The Wall Street Journal (April 2-3, 2022), “several companies have started commercial operations in the U.S. involving dozens or hundreds of deliveries a day at each location.” The companies are vying to be Americans’ choice when they want a bottle of Advil, a takeout meal, or the next iPhone delivered in under 30 minutes—once federal regulators enable broader rollouts.

Zipline recently started working on deliveries with Walmart at an Arkansas location. Flytrex, an Israeli startup focused on food delivery in the U.S. suburbs, just announced a new delivery station in Texas after 2 years of testing. Wing, a unit of Google, has rapidly increased its deliveries in Virginia as a result of the pandemic. While still small-scale, the operations mean that in a handful of locations, regular people now can try these services for themselves.

Advocates for drone delivery say the technology could reduce emissions, the cost per trip, and traffic on roads, while also making sub-half-hour delivery—some companies are claiming in as little as 5 minutes—the new norm in the race toward e-commerce instant gratification.

Zipline has logged 20 million miles of flights across 275,000 commercial deliveries, mostly of blood, vaccines and medical products in Rwanda and Ghana. Last year, it built a launch platform attached to the back of a Walmart in Arkansas, near the firm’s HQ. That facility can serve any home in a 50-mile radius. Zipline operates 11-foot wide, fixed-wing drones that launch from a steel rail by an electric motor that accelerates the 44-pound aircraft to 60 miles an hour in one second. Flying autonomously, the drones drop orders at their assigned addresses in cardboard boxes suspended beneath paper parachutes. Upon return to the launch station, they maneuver so that a hook on their tails catches a suspended line. Zipline’s drones can hit a target as small as two parking spaces, with a package up to 4 pounds.

Flytrex has been making deliveries from a Walmart store in North Carolina, where it has delivered more than 18,000 items and can serve up to 10,000 homes. Its new delivery station near Fort Worth offers delivery for the Chili’s and Maggiano’s Little Italy restaurant chains.