When Audi decided to move global production of its Q5 SUV to North America, the prize went to Mexico. Audi now is finishing a $1.3 billion factory in a small town called San Jose Chiapa. Mexico’s low wages and improved logistics were part of the draw. But for Audi, which plans to ship the factory’s output all over the world, what tipped the scales was Mexico’s unrivaled trade relationships. The Audi deal shows that Mexico’s 40 different free-trade pacts give it allure in the global car market, threatening the American South’s industrial renewal.

Seven Asian and European auto makers have just opened, or will open shortly, new Mexican assembly plants, reports The Wall Street Journal (March 18, 2015). Others have made significant expansions in Mexico, among them Nissan, GM, Ford and Fiat Chrysler. This month, VW said it would spend $1 billion END_OF_DOCUMENT_TOKEN_TO_BE_REPLACED 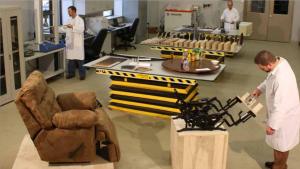 When Ron Wanek started a furniture company in Arcadia, Wisconsin in 1970, his chances of becoming an industry giant looked remote, writes The Wall Street Journal (Mar. 6, 2015). Since then, most of the Carolina and Virginia manufacturers have been crushed by Asian competition. Wanek ’s Ashley Furniture Industries is now by far the biggest U.S.-based maker and retailer of furniture, with $4 billion in sales last year  (twice as much as La-Z-Boy and Ethan Allen combined). END_OF_DOCUMENT_TOKEN_TO_BE_REPLACED

“From steam engines to robotic welders and ATMs,” writes The Wall Street Journal (Feb. 25, 2015), “technology has long displaced humans—always creating new, often higher-skill jobs in its wake.” But recent advances—everything from driverless cars to computers that can read human facial expressions—have pushed experts to look anew at the changes automation will bring to the labor force. They wonder if automation technology is near a tipping point, when machines finally master traits that have kept human workers irreplaceable. END_OF_DOCUMENT_TOKEN_TO_BE_REPLACED