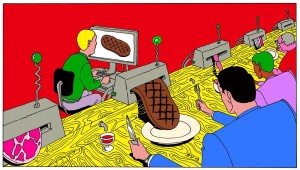 The walls of Redefine Meat Ltd.’s lab in Rehovot, Israel, are plastered with posters of cuts of beef, including sirloins, T-bones, and rib-eyes. But the startup isn’t looking to sell the perfect cut of beef. Instead, it wants to create a plant-based facsimile. The company is building a 3D printer that it says will produce a meatless steak that’s so fatty, juicy, and perfectly meaty that even the most dedicated carnivore won’t know the difference. “All meat alternatives today are basically a meat-homogeneous mass,” says  Redefine Meat’s CEO. “If you 3D-print it, you can control what’s happening inside the mass to improve the texture and to improve the flavor.”

Redefine Meat says that 3D printing promises to give diners the same sensory experience as eating a real T-bone or rump roast, writes BusinessWeek (Nov. 25, 2019). The technology involves developing a design that can then be printed countless times. First, proprietary computer software creates a detailed model of a steak, including the muscle, fat, and blood, based on whichever cut it’s emulating. That blueprint is then transmitted to a printer loaded with plant-based “inks.” Hit the start button and out comes a “steak.”

While ground-meat replacements are widely available, mimicking an actual cut of meat has proved far more challenging. That’s because replicating the mouthfeel and visual appeal of a juicy sirloin is a lot tougher than cranking out something that’s going to be slapped between a bun. “A beefsteak is the holy grail of plant-based meat,“ says one exec.

The faux-meat category has already reached an estimated $14 billion in annual sales worldwide, and will grow to $140 billion in 2029. Redefine Meat plans to introduce its plant-based steaks to the public in the first quarter of 2020. It will supply customers, including restaurants, meat distributors, and retailers, with both the printers and cartridges. Redefine Meat’s printer can now deliver five 7-ounce steaks in an hour. The company hopes to speed that up to 22 pounds by the end of 2020. That will mean 50 servings an hour, or the equivalent of a cow’s worth of steak a day.