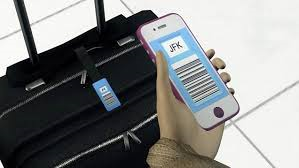 “For decades, fliers have checked their bags the same way: hand them to an airline employee and trust that they will reappear at the destination,” writes The Wall Street Journal (July 6, 2015). Now big changes to that model are coming as airlines look to streamline the airport experience—and pass more work to customers and machines.

Their latest ideas including letting fliers tag their own bags, print luggage tags at home and track their bags on smartphones. Later this year, some fliers in Europe likely will begin using what could be the future of flying luggage: permanent bag tags that digitally update if flight plans change. Improved technology and loosened security rules are accelerating changes to baggage handling. More than 1/3 of global airlines now ask fliers to tag their own bags, compared with 13% in 2009. By 2018, 3/4 of carriers intend to offer the service.

Airlines say such technology isn’t intended to reduce staff, but instead free workers to handle customer problems. From 2004 to 2014, a period in which airlines added many self-service technologies like kiosks, the number of U.S. ticket agents fell about 13.5% to 138,000. U.S. airline passengers increased 8.6% to 761 million over that period.

The biggest of the coming changes is permanent bag tags, electronic devices that strap on to frequent fliers’ luggage and digitally display their flight information. The tags display bar codes like a traditional tag, allowing them to work with existing infrastructure. Fliers update the tags via Bluetooth from their smartphones, and the airline can also remotely update the tag if its owner gets rerouted. Air France KLM is also releasing a bag tracker that goes inside luggage. The device uses satellite data to give travelers the bag’s location and light sensors to alert them if the bag is opened en route. Tracking should help reduce the rate of mishandled bags world-wide, though airlines in 2014 lost 7.3 bags per 1,000 fliers, compared with 13.2 bags in 2003.