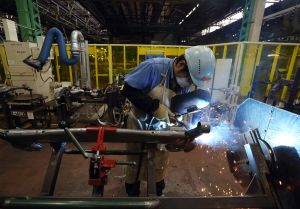 Inside Toyota Motor Corp.’s oldest plant, there’s a corner where humans have taken over from robots in pounding glowing lumps of metal into crankshafts, reports BusinessWeek(April 7, 2014). “We need to become more solid and get back to basics, to sharpen our manual skills and further develop them,” said a company exec. “When I was a novice, experienced masters used to be called gods, and they could make anything.” These “gods” are making a comeback at Toyota, the company that long set the pace for manufacturing prowess. Toyota’s next step forward is counter-intuitive in an age of automation: Humans are taking the place of machines in plants across Japan so workers can develop new skills and figure out ways to improve production lines and the car-building process.

“Toyota views their people who work in a plant like this as craftsmen who need to continue to refine their art and skill level,” said Jeff Liker, who has written 8 books on Toyota. Learning how to make car parts from scratch gives younger workers insights they otherwise wouldn’t get from picking parts from bins and conveyor belts, or pressing buttons on machines. At about 100 manual-intensive workspaces  across Toyota’s factories in Japan, these lessons can then be applied to reprogram machines to cut down on waste and improve processes. At the forging division of Toyota’s Honsha plant, workers twist, turn and hammer metal into crankshafts instead of using the typically automated process. Experiences there have led to innovations in reducing levels of scrap by 10% and shortening the production line length 96%.

Though Toyota doesn’t envision the day it will rid itself of robots — 760 of them take part in virtually all of the production process at its Motomachi plant – it has introduced multiple lines dedicated to manual labor in each of Toyota’s factories in Japan. Says one manager: “To be the master of the machine, you have to have the knowledge and the skills to teach the machine.”  Adds a University of Tokyo professor:   “Fully automated machines don’t evolve on their own. Sticking to a specific mechanization may lead to omission of kaizen and improvement.”