When three-tiered car haulers packed with Mazda3s pulled out of the dusty Mexican rail yard here last month, they did more than mark Mazda’s return to North American manufacturing after pulling the plug on Michigan production in 2012. They represented the latest volley in a south-of-the-border blitz by Japanese automakers. Within four months, Nissan, Honda and Mazda have opened assembly plants in what is becoming one of the world’s hottest auto hubs. Mexico is on pace to become the world’s No. 1 auto exporting country to the U.S., thanks largely to the addition of 605,000 units of capacity by those three Japanese automakers, reports Automotive News (March 10, 2014).

Japanese manufacturers are poised for a new assault from Mexico because they can:

• Avoid tariffs on car and truck imports into the United States.

• Improve product availability with a shorter pipeline to dealers.

With all this new Japanese capacity, Mexico will eclipse Canada and Japan as the No. 1 exporter to the U.S. next year. Labor and logistics savings are expected to be substantial compared with building cars in Japan and shipping them across the Pacific Ocean. Mexican labor costs are 1/9th those in the U.S. But any savings are initially offset by the upfront costs of the new factories. Honda, for example, sank $1.2 billion into its assembly plant and a new transmission line.  And successfully building an export hub in Mexico means developing a network of high-quality local suppliers. 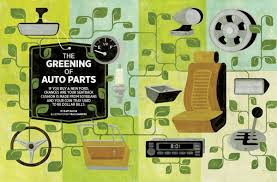 If you’re driving a new Ford, chances are you’re sitting on a seat filled with foam made from soybeans, reports the Orlando Sentinel (March 14, 2014).  It’s part of the push by many automakers to produce cars that are cleaner and greener. Plant-based materials that are used now or are in some phase of development by Ford include:

1. Fibers from coconut husks that can be included in sound-absorbing underlayment for carpet.

2. Wheat straw that is showing promise as reinforcement for plastics.

3. Latex extracted from dandelion roots to produce natural rubber, potentially replacing rubber from Asia or synthetic rubber made from petroleum.

“We are a group of research scientists developing these formulations and composites and looking at non-traditional materials and implementing them in our vehicles,” says a Ford engineer. The long list of automobile parts and pieces made traditionally from petroleum ingredients include cup holders, floor mats, engine O-rings and seals, dashboard trim and many more. A typical car is made with 100 kinds of plastic materials that weigh a combined 300 pounds, which includes 30 pounds of seat foam. Ford requires plant-based materials to perform as well as and cost no more than conventional products. 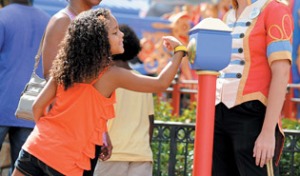 The couple  tapped their lunch orders onto a touchscreen at the entrance to the restaurant at Disney World and were told to take any open seat. Moments later a food server appeared at their table with their sandwiches. “How did they know where we were sitting,” asked the guest.The answer, writes BusinessWeek(March 10-16, 2014), was on the electronic bands the couple wore on their wrists.

That’s the magic of the MyMagic+, Walt Disney’s $1 billion experiment in crowd control, data collection, and wearable technology that could change the way people play—and spend–at Disney. If the system works, it could be copied not only by other theme parks but also by museums, zoos, airports, and malls. Change is always tricky for Disney,  where introducing a new brand of coffee can spark a revolt by fans. And MyMagic+ promises far more radical change. It’s a sweeping reservation and ride planning system that allows for bookings months in advance on a website or smartphone app. Bracelets called MagicBands, which link electronically to a database of visitor information, serve as admission tickets, hotel keys, and credit or debit cards; a tap against a sensor pays for food or trinkets. The bands have RFID chips—which critics derisively call spychips.

The goal is to offer people what Disney calls “a more immersive, more seamless, and more personal experience”—allowing Disney employees to address a child by name, for example, or wish someone a happy birthday. Moreover, visitors with full Disney World schedules mapped out in advance on the MyMagic+ system will be less likely to jump spontaneously to one of the dozens of other attractions here in Central Florida, including Universal, SeaWorld, and Legoland. And, of course, the MagicBands make it so easy to spend. The new system also helped the Magic Kingdom park accommodate 3,000 additional daily guests during the Christmas holiday season by reducing congestion around the most popular attractions.