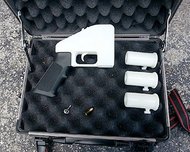 “The gun fired four shots into a gelatin block,” writes The New York Times (Oct. 18, 2013). Each nine-millimeter bullet punched deep into the substance, which was meant to mimic the density of a human body. For the experts at the Austrian Interior Ministry performing the test, it was a clear sign: This was a deadly weapon. But it was no ordinary gun. The officials had downloaded the gun’s digital blueprints from the Internet and “printed” the weapon on a type of 3-D printer that any person could buy online for about $1,360. It took the Austrian authorities $68 worth of plastic polymer, built up layer by layer according to the software instructions, to make the gun.

Law enforcement agencies across Europe are on alert over the proliferation of gun-making software that is easily found on the Internet and can be used to make a weapon on a consumer-grade 3-D printer. In May, after a 25-year-old law student from Texas posted designs for a 3-D-printed handgun online, the files were downloaded more than 100,000 times in just 2 days before the State Department demanded they be removed. Stoking the anxiety have been well-publicized examples in recent months of people evading airport-style security scanners with 3-D-printed plastic weapons, whose only metal components are firing pins no bigger than a short common nail. Last summer, an Israeli TV reporter successfully toted a 3-D-made handgun into the Israeli parliament, where Prime Minister Netanyahu was giving an address.

The manufacture of weapons using 3-D printers is already banned by a European Union directive to member nations. Enforcing that rule, however, may prove a challenge. A total of 35,508 personal printers were sold worldwide last year, up nearly 50% from 2011. Most of these machines were sold to hobbyists, engineering students, and colleges. Tightening airport security might be one possible response, according to the German Police Union. “It is quite conceivable that this technical development will make full-body scanners at airports mandatory.”