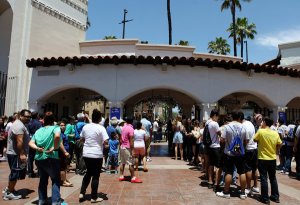 Since I live in Orlando, the theme park capital of the world, the recent New York Timesarticle (June 10, 2013) “At Theme Parks, A VIP Ticket to Ride”, caught my eye. Theme parks have traditionally been the ultimate melting pots. Tourists, retirees, rowdy teenagers, families and fathers who would rather be golfing are all thrown together in an egalitarian experience in which the queue for one is the queue for all, and cotton candy is the food of the masses. Not anymore.

As stratification becomes more pronounced in all corners of America, from air travel to Broadway shows to health care, theme parks in recent years have been adopting a similarly tiered model, with special access and perks for those willing to pay. Now Universal Studios has pushed the practice to a new level. It has introduced a $299 V.I.P. ticket (the regular admission is about $85), just in time for the summer high season, that comes with valet parking, breakfast in a luxury lounge, special access to Universal’s back lot, unlimited line-skipping and a fancy lunch.

Fearful of puncturing its utopian image, Disney has stuck to a single class of ticket. V.I.P. tour guides are available, but Disney charges an exorbitant price — $380 an hour, with a minimum of six hours — to limit demand. Business is good at both companies. Universal’s 3 theme parks in the U.S. attracted 20 million people last year, a 19% increase from 2010. The Magic Kingdom at Walt Disney World recently recorded the busiest day in its 41-year history.

The amusement park industry urgently wants to expand profits without introducing costly new rides every summer. Universal, which recorded $953 million in profit from its parks in 2012, has no major new attractions planned until next year; the V.I.P. Experience, in the meantime, is a relatively low-cost way to generate revenue and send a message of bigger and better into the marketplace.