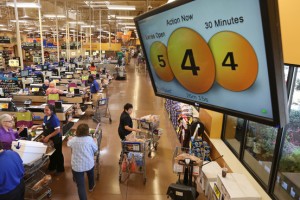 QueVision monitors tell how many lanes need to be open now and in 30 min.

Supermarket giant Kroger, reports The Wall Street Journal (May 2, 2013), is winning the war against lengthy checkout lines with a powerful weapon: infrared cameras long used by the military and law-enforcement to track people. These cameras, which detect body heat, sit at the entrances and above cash registers at most of Kroger’s roughly 2,400 stores. Paired with in-house software that determines the number of lanes that need to be open, the technology has reduced the customer’s average wait time to 26 seconds. That compares with an average of four minutes before Kroger began installing the cameras in 2010.

Reducing wait times is becoming a top priority for retailers, from high-end department stores to hardware chains to fast-food outlets. Battling both online rivals that offer at-home convenience and intensifying competition among fellow brick-and-mortar outlets, many companies see enhancing the shopping experience as a way to build loyalty. Kroger’s system, dubbed QueVision, is now in about 95% of its stores. The system includes software developed by Kroger’s IT department that predicts for each store how long those customers spend shopping based on the day and time. The system determines the number of lanes that need to be open in 30-minute increments, and displays the information on monitors above the lanes so supervisors can deploy cashiers accordingly.

The company says surveys show customer perception of its checkout speed has improved markedly since 2010. “The bottom line is we want our checkout experience to be the best, and it’s our goal that our customers will enjoy the experience so much that they’ll want to return,” says Kroger’s senior VP.